Ariel Winter is talking about mental and physical health once more on social media.

Fans have been asking questions and she has been answering them on her Instagram stories. Questions like “The Office or Parks and Rec?” or “Why so thin?” For quite some time Winter has been responding back to body shamers and critics who have been criticizing about her weight and curves.

The ‘Modern Family‘ star has been bombarded with questions about her figure and outward appearance and she has been responding to them on social media. Her most recent Q&A session has been no different as fans once again commented on her physical appearance once again.

In recent times, Ariel Winter has lost a lot of weight and it has become a topic for conversation in the comments section. People are claiming that her loss of weight is due to surgeries and some are claiming she took some drugs to lose body fat. She gave a pretty extensive and detailed reply to a fan’s question on her body weight. 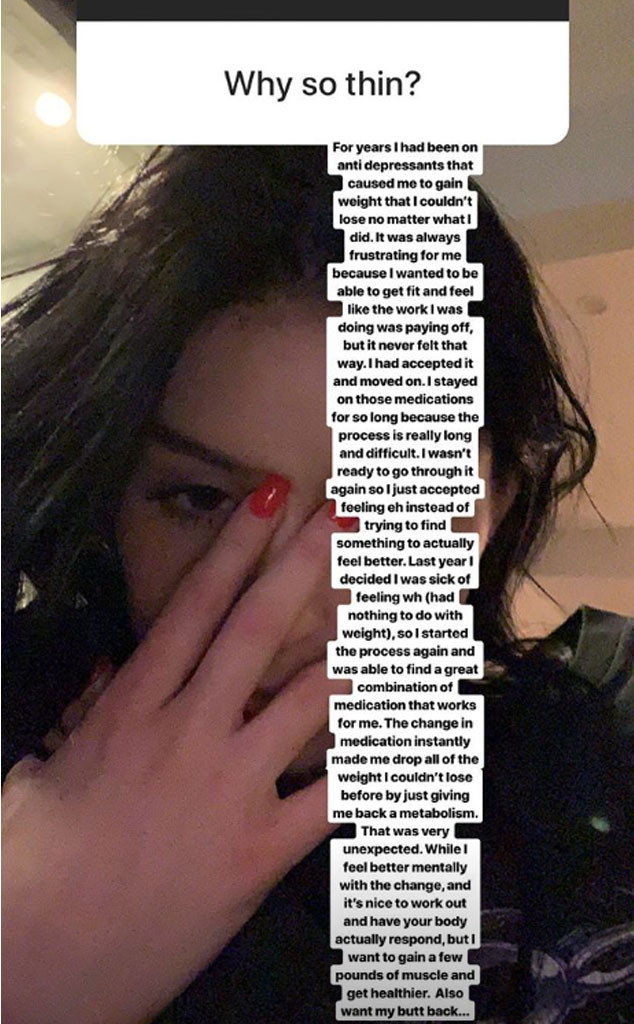 “For years I had been on anti-depressants that caused me to gain weight that I couldn’t lose no matter what I did. It was always frustrating for me because I wanted to get fit and feel like the work I was doing was paying off but never felt that way.” She further adds, “I had accepted it and moved on. I stayed on these medications for so long because the process is really long and difficult.

Throughout her statement, she says that she has been more or less “feeling eh” on a constant basis and she “just accepted” that instead of “trying to find something to actually feel better.”

She had a change of heart because she “decided I was sick of feeling eh.” and was going to do something about it. However, she says that her feeling “eh had nothing to do with weight.

Thus she had a fresh start. Now, she found “a great combination of medication that works for me.”

The actress praises the new medication for undergoing weight loss. Especially the “unexpected” impact the meds had on her metabolism and body chemistry.

She writes that “The change in medication instantly made me drop all of the weight I couldn’t lose before just giving me back a metabolism.”

Ariel Winter further explains that “I feel better mentally with the change” and that it’s “nice to work out and have your body actually respond” which didn’t happen before. However, the star wants to  “to gain a few pounds of muscle and get healthier.” Along with getting her “butt back.”

She even addresses the topic of Mental Health as well.

In response to a fan’s question about her mental health, who thanked her for speaking up, she says that “Mental health is incredibly important to me. Same amount of importance as physical health.”

She talks about her own experience regarding how much priority she gives to her mental health.

She writes that “I’ve been in therapy every week for 6 years and I don’t know where I’d be without it. I’ve grown so much as a person and been able to learn how to deal with things from my past that affect my present. It’s a journey so I’m not all the way there, but I’m doing pretty good.”

She gave credit to her medication for “finally working” although it took “forever to find the right ones.”

She clarifies further that “Like I said, it’s a journey and I’m lucky to have people and furbabies around me to show support. There’s nothing shameful about seeing a therapist or being on medication.”

The actress also gave her two cents about the future and overcoming the obstacles of achieving a healthy mind.

She ended the session with, “I’m hoping the discussions will keep us progressing in the right direction with mental health checkups. We don’t need to hide our struggles even though I know how hard it is to share. We are doing something to better our own lives. Always take care of yourself and don’t listen to anyone telling you it doesn’t exist or it’s something to keep to yourself.”

On September 23, the Kingdom will mark its 91st anniversary of establishment. Saudi Arabians will have a long weekend next week as the kingdom prepares to commemorate its National Day. On the occasion of National Day in...

The United Nations is holding an assistance conference in Geneva today (Monday) in the hopes of raising more than $600 million for Afghanistan, warning of a humanitarian disaster in the aftermath of the Taliban’s...

US says Taliban ‘businesslike and professional’ in Afghan evacuation

The US lauded the Taliban on Thursday for being businesslike and cooperative in allowing the first American evacuation from Afghanistan since the US military pullout. The departure of a chartered Qatar Airways flight...

Malinga has announced his retirement from international cricket

Ramiz Raja was elected as the next chairman of the PCB ‘unanimously and without opposition.’

US says Taliban ‘businesslike and professional’ in Afghan evacuation

If the Taliban outlaw women’s cricket, Australia will cancel a men’s Test match against Afghanistan.